Here is a collection of even more evidence on the safety of the CatBib, plus its effectiveness on preventing cats from catching and killing birds.

2013 Collar Research on The Safety Of Cat Collars

A simple study on the incidence of collar-related injuries for cats in Australia has completed (Animal Welfare 2013, 22: 95-105) . Cat owners and veterinarians were asked to complete a survey detailing any collar-related injuries and types of collars used. The researchers found that “A perception that collars are hazardous limits their use.” And they concluded that “… At one practice, over three years, only 0.33% of 4,460 cat cases were collar injuries, while 180 cat cases at four clinics during August and November 2011 included none.”

Conclusion: the number of injuries from collars is extremely small.

Scientific Research Proving Effectiveness
of Anti- Aggression With The CatBib

There are hints the CatBib may be useful in reducing intercat aggression. In the CatBib field trial (Murdoch University, Perth, Western Australia “The Effectiveness of the CatBib in Reducing Predation on Wildlife by Pet Cats” Biological Conservation, July 2007) the researchers noted that “of eleven cats involved in cat fights, only two were wearing CatBibs. …. While there was no statistically significant evidence that cats wearing CatBibs were less likely to fight and wander, the data do point in that direction and further investigation is warranted.”

2010 Independent research to test for possible CatBib anti-aggression properties is planned by Murdoch University Biology Dept. for the second half of 2010.
2011 Followed by a second trial in 2011, testing for the CatBib’s influence to reduce cat wandering/roaming.

In the USA several veterinarians picked up on the 2007 Biological Conservation paper that hints at the possible anti-aggression properties of the CatBib: July 15, 2006 – American Veterinary Medical Association (AVMA) Convention, Dr. Jacqui Neilson, animal behavior specialist, lectured on feline behavior problems, and mentions the CatBib as a tool to reduce intercat aggression. Then in October 2006 the Albuquerque Journal, ASK THE VET column by Dr. Jeff Nichol, a veterinarian and pet behavior specialist, recommended the CatBib as one tool to help reduce intercat aggression as well as stop cats from killing birds.

If any customers are using the CatBib to reduce intercat aggression in a multicat household, please contact Cat Goods with results. You’ll be helping other cat owners and you’ll be helping get more cats adopted.

Prefer the research of actual CatBib owners on how effective
it is at stopping their cat from killing birds?
Over 200 testimonials and photos!!! And more coming in all the time

Click here to read about our happy customers and their testimonials about how effective the CatBib was for them, their cats and saving the life of birds. 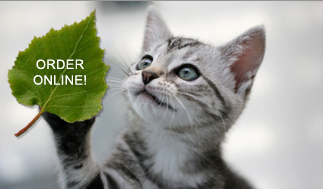 Read More About Our Cat Collars

We carry safety colors too!