You are here: Home › CatBib Featured In The News

A growing list of magazines, newspaper articles and books from all over the world have featured the CatBib within their news articles praising its effectiveness to help prevent cats from hunting, attacking and killing birds.

May 2017:  A nice article on the CatBib published this week in Australia’s Narooma News.  The Eurobodalla Council is distributing free CatBibs to reduce the threats domestic cats are posing on wildlife there.

“We’re hoping it eventually becomes normal practice that cats wear CatBibs every time they go outside…. Ms Fink-Downes said the council held a trial in 2013-14 with cat owners in Congo to protect the greater glider received  “nothing but positive feedback”.

Thanks Eurobodalla for caring about cats, birds and other wildlife!

January 2017:  A New Zealand news paper ‘Times-Age’ publishes an informative case study from a local resident Mrs Ward, who has outfitted her cat (Teddy Bear) with a CatBib when other cat collar and bells weren’t working.  “Mrs. Ward was skeptical at first, but quickly realized how successful it would be.  ‘I kept thinking it (the CatBib) was going to be a nuisance, but found when he grooms himself, he grooms the bib as well.”  Thanks Mrs. Ward, for doing your part in saving birds!

September 2016:  Considering a career in animal care?  Our friends at Open Colleges have interesting career choices including cats and birds, have Expert Advice, and are advocates of the CatBib.  See their feed HERE

May 2016:  The Australasian Bat Society is promoting the CatBib to protect microbats from Cats.  Read about it HERE

October 2015:  A reader get’s here question answered on ‘The Telegraph’.  “How do I get my cat to stop killing birds?” –   Read about it HERE

May, 2014 Tai Moses features CatBib in her new book Zooburbia: Meditations On The Wild Animals Among Us, just out from Parallax Press. The CatBib is mentioned in Chapter 16, “Peaceable Kingdom”. Zooburbia is featured in the May 2014 edition of O: The Oprah Magazine as one of “Ten Titles to Pick Up Now.”

November 2013: A United Kingdom product review magazine, with the funny name, WHICH?, features the CatBib in the article “Why songbirds are declining”. Thanks!

August 10, 2012 NATIONAL PUBLIC RADIO interviews Dr Kerrie Anne Loyd, University of Georgia. She’s the researcher who put kitty cameras on cats to see what they do when outdoors. She recommends using the CatBib to stop cats from killing wildlife. ” Listen to the interview.

March/April 2012 issue Wildbird magazine:
Lynda McLaughlin writes: “Our bibbed felines can frolic outdoors, and the wild birds can feed while enjoying the protection that the CatBibs provide. It just feels like the right thing to do.” 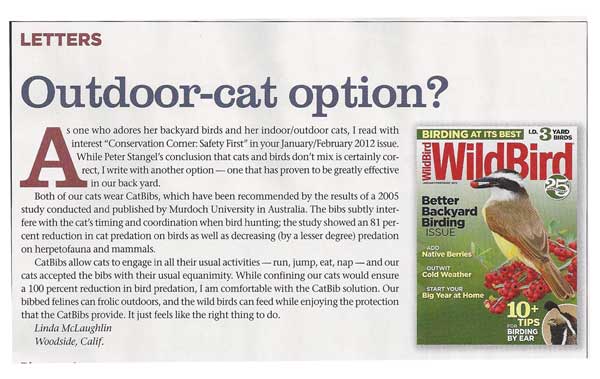 More CatBib Mentions In The News

Prevent your cat from killing birds.
Over 200 testimonials from customers that decided CatBib was the perfect way to stop their cats from hunting!!!

Click here to read about our happy customers and their testimonials about how effective the CatBib was for them, their cats and saving the life of birds.

The 'Native Animal Rescue of Santa Cruz County' has also started a new blog focused on the coexistence with native animals. Their first blog is entitled: "How cats and birds can peacefully coexist".

Freedom by Jonathan Franzen. One of the author's main characters tells how to save birds with the "neoprene bib", the CatBib. Oprah Winfrey choose Freedom as her Sept. 2010 Book Pick.

Rodale Press, "WHOLE GREEN CATALOG: 1,000 Best Things for you and the Earth" Features the CatBib in the "Greening Your Pet" chapter by Michael Fox, DVM.